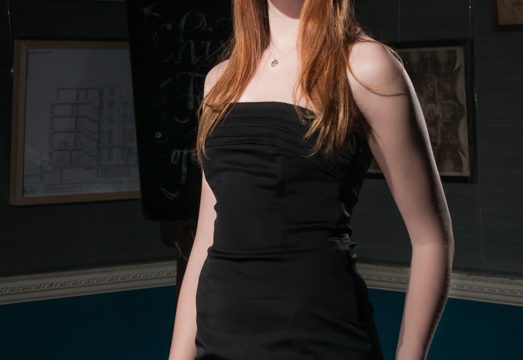 One light is good, but two are better. Here’s a strobist technique for using off camera flash to create rim light.

Using a second off camera flash to create a rim light is a technique which enables you to separate your subject from a dark background. Without the rim light, dark parts of your subject will merge into the background and you’ll lose separation and be unable to differentiate between where the subject ends and the background begins.

The addition of an extra strobe aimed at the model’s back in this image does several things which all improve the photo – it separates her from the dark background, it enhances and emphasises her shape and it highlights her hair giving it texture and a healthy glow.

We used two lights, one on a light stand diffused only through a dome diffuser, above and in front of the model which perfectly exposes her face. The second light is placed behind the model and creates the rim light. It is aimed directly at the model’s back and the flash unit is kept out of shot. In this instance the flash was fired through a large white diffuser which has nicely softened the rim light and also created a hair light. It’s good to keep the rim light at a relatively low power in comparison to the main light, overpowering it can cause blown out highlights. Be subtle with this technique.

Stay In The Know